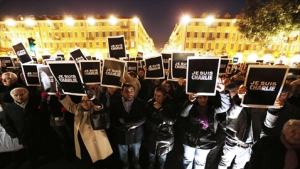 Can it be left unchecked??? Does it really exist???

Has Charlie Hebdo and Co. expressing THE Peak of Civilization OR Worst tide of Human Values?

As a reaction to the Paris attacks on Charlie Hebdo’s office on 7th January, 2015; the paper again published blasphemous images of our beloved Prophet (S.A.W.) on 14th January, 2015 in response to all of this today we see anger, protests and opposition against this in the whole Muslim world. Charlie Hebdo did this in the name of freedom of speech and we see alot of people supporting this thinking. However, living in such a modern age, I think everyone would question rationale and logic behind this irresponsible and disrespectful freedom of speech.

The first thing came in my mind after knowing all this was the Hadith of Prophet (S.A.W.) that “None of you becomes a believer until I am dearer to him than his children, his parents and all mankind.” (as reported by Bukhari and Muslim) Some versions add: “his life, his wealth and his family”. (Ref#1)

What would be our reaction if someone makes such cartoons of our father, mother or any other loved one? Obviously most of us will react and try to stop the one doing this and perhaps will keep such offender at arms length for the whole life… This is not the first time Charlie Hebdo did this thing; every now and then, they try to test our nerves by provoking us. But the question is Why do we only  wake up on the provocation, what are we doing in between? How can we as Muslims ever forget this insult without getting all this to a final conclusion? If it’s not taken to justice and fixed for good; it will raise its head every now and then and may well be case of horrific clash of civilizations…

Can “Freedom of Speech” be left unrestrained???

This kind of “Freedom of Speech” should really be rephrased as “Freedom of Hate” because this does not mean anything except spreading uneasiness among others. Knowingly that Prophet (S.A.W) is such a Noble role model for Muslims; what sanity is this to target the emotions of such a huge population of the world? What sort of Freedom is this which allows you to provoke about 25% of the world’s population whenever you want?

Everything in the World be it the working of this Universe, evolving human breed, any good social system, any machinery or the inter-relation of all these elements; all have immense discipline and certain boundaries attached to them. We have also seen the destructive results of undue interference in these systems.

Freedom of speech/expression; like any other thing in the world society;  have limitations. I strongly believe that our words and actions in world society must not provoke hate towards certain communities. How can you hurt someone’s sacred emotions in the name of this freedom? Is this what we have achieved in the long journey of mankind???

Does it really exist?

“Freedom for the Powerful” is another good alternative name I would suggest for such Freedom of Speech. We see captivated lands of Kashmir andPalestine and the condition of UN resolutions on these issues. The powerful countries use their powers to stop anything going in favor of these issues. Why these big guns can not allow (and support) these captivated people to express and achieve their desires of freedom?

We saw the deleted post of Hamza Ali Abbasi from facebook on this Issue and then the stream of debate on that post related to Freedom of Expression. Hamza bro, you most rightly exposed Gaps in facebook and their dual standards. Bravo!

honestly, true freedom of speech does not exist today. It’s just a fashion (or tool) used by the liberals/powerful to pave their interests.

And Yes…Blood also has Class Difference!

More than 40 head of states visited France to show their solidarity with French people. Worthy to mention this was the biggest million march in the history of France carrying people from all religions and nationalities. However, it’s an utmost irony that these people did not reacted to even half an extent when there were sabotage attacks in Pakistan targeting our religious and national trademarks, Malaysian plane disappearance/crash, when Freedom flotilla got attacked OR when Muslims were massacred in India and Myanmar.

So, what is the difference between French blood and others? This is a big shame for this so called developed and civilized world. You gathered in Unity with France? Who will stand in Unity for the halted emotions of 1.6 Billion Muslims? Why you kept quiet when blasphemous images were first published, why this satirical paper was not regularized at that time? Why it can not be held accountable now???

Like many other such sabotages (like Ajmal Kassab drama in India), the Charlie Hebdo  attacks were also questioned as false Flag operations to gain greater objectives out of it; even from the BBC(This BBC video has been removed due to a breach of the Terms of Use, Kiya Smjhay???)…Unfortunately, our media did not raise its voice duly and did not work on probability of a false flag operation. We can show programs with utmost research and re-enactment, why can not we air programs on these incidents which take dignity of Muslim world at stake?

Also our media can carry out such programs in which the true image of Islam is depicted. The need to time is to clarify the misconceptions about Islam in the minds of people specially relating to the Western world who think Islam is something like ISIS and TTP. Realize your duty in these times; this will be a great Jihad against the hypocritical media around the world trying to corner out Muslims.

Many of the Muslim head of states condemned Charlie Hebdo attacks and Blasphemous images thereafter, but we felt real lack of unity among Muslims leadership.  This is a real pity sight to see Muslims in such a weak state. Today, another Noor-ud-din Zangi (a dignified Muslim Hero who safeguarded Roza-e-Rasool,S.A.W. in 557 Hijri; Ref#2) is awaited to stand stern against this blasphemy and attack on beloved prophet (S.A.W.)

Future of this Freedom!

After too much of freedom exercise on Social media, we see countries making laws to regularize the mouth of expression. If the social media can be controlled by governments then why not such hated papers? We are most certainly not heading in right direction. This difference of thought on blasphemy may well erupt on an un-controllable scale. Like explained above, there must be some boundaries on Freedom of Expression/speech. Morality needs to be placed well above all Freedoms. Governments of such newspapers must review what’s happening in their countries in the name of Freedom of Speech. All such is actually resulting in Freedom to spread Hate and creating mis-understanding between various faiths…

To all supporters of Charlie Hebdo and Co: “You stood as “I am Charlie” after Paris attacks, when will you realize human emotions of Muslims related to their beloved prophet (S.A.W.) and stand by them as “I am Human???”

This article was published at following, dated 28th January, 2015

Can “Freedom of Speech” be left unrestrained???